CBD Medical Supply is where Hemp meets Health. We are on a mission is to improve the quality of life for individuals by manufacturing and supplying the highest quality hemp-derived CBD products. Our goal is to bring quality, honesty, integrity and accountability to the CBD market. All of our products are tested by an independent laboratory to ensure our standards of quality are met.

We are a company founded on the belief that humans and hemp or cannabis have a symbiotic relationship. CBD helps many people find and maintain a homeostasis that enhances their lives and improves daily living.  This synergy between humans and cannabis is demonstrated in many examples, most obvious is the Endocannabinoid System. It has been found to be the most widespread receptor system in the human body, explaining why cannabis has so many different effects. Our bodies already naturally produce cannabinoids called endocannabinoids. When you add phytocannabinoids (cannabinoids from plants) you are giving your body the building blocks to achieve and maintain homeostasis.

Another prime example of this symbiotic relationship is how long our bodies store cannabinoids. Humans have stopped consuming the plant yet they can still test positive for cannabinoids 30 days after stopping consumption. It shows that the human body is storing cannabinoids for use for many different purposes in our physiology.

“In December 2017, the World Health Organization came out with a report stating that CBD has no addictive properties, is non-psychoactive, evinces no discernible side effects and shows great potential to serve as a viable form of treatment for a number of maladies.”

We at CBD Medical Supply take a clinical healthcare approach to understand symptoms and treat the pain and other ailments utilizing medicinal cannabis in conjunction with traditional healthcare practices. Our Team has the knowledge and experience to help guide and educate patients and their families about the products and the effects. Unlike most of the companies in the hemp space, we are an organization of individuals with healthcare backgrounds and experience. Truly a differentiating factor that we believe will help us relate and gain the trust of physicians to recommend and prescribe the CBD Medical Supply product lines and help manage their patient population. We will offer dosing instruction and product guidance.

The CBD Medical Supply Advantage
CBD Medical Supply uses Ultrasonic Sonication Technology to break down particle size, create liposomes and make the hemp oil extract more easily absorbable with increased bioavailability. The human body is made up of 60% water, hemp extracts are oil(hydrophobic not water soluble molecules). In order for the cannabinoids to be more effective, we create Liposomes which move more freely throughout the bloodstream and body .
Liposomal drug delivery is produced by the mechanical shear force of ultrasonic cavitation to reduce the droplet size of cannabinoids in combination with a fatty acid carrier oil(ie. coconut oil). Liposomes work with the phosopholipids in the semi-permeable membrane of our body’s cells to transport nutrients into the cell. Liposomes are composed of the same material as a cell membrane (lipid bilayer), they essentially encapsulate the cannabinoids so they can enter a cells membrane more effectively and efficiently. It is very similar to nanoparticles but not made with the same intensity.

Our dosing is specifically designed to be highly controllable and easily adjustable.  We offer products that are pure CBD containing zero THC, protecting those who cannot test positive or just do not want for THC. In addition to products made using Full Spectrum High CBD Hemp oil extract that contain less than .3% THC by volume.

Using a minimalist approach to product creation we have a goal of 5 ingredients or less. A majority of products only have 3 ingredients: base carrier oil, Active and peppermint oil to cut the bitterness from the active. We are proudly a Chemical Free Company, you will not find chemical preservatives of any kind in our ingredient lists. 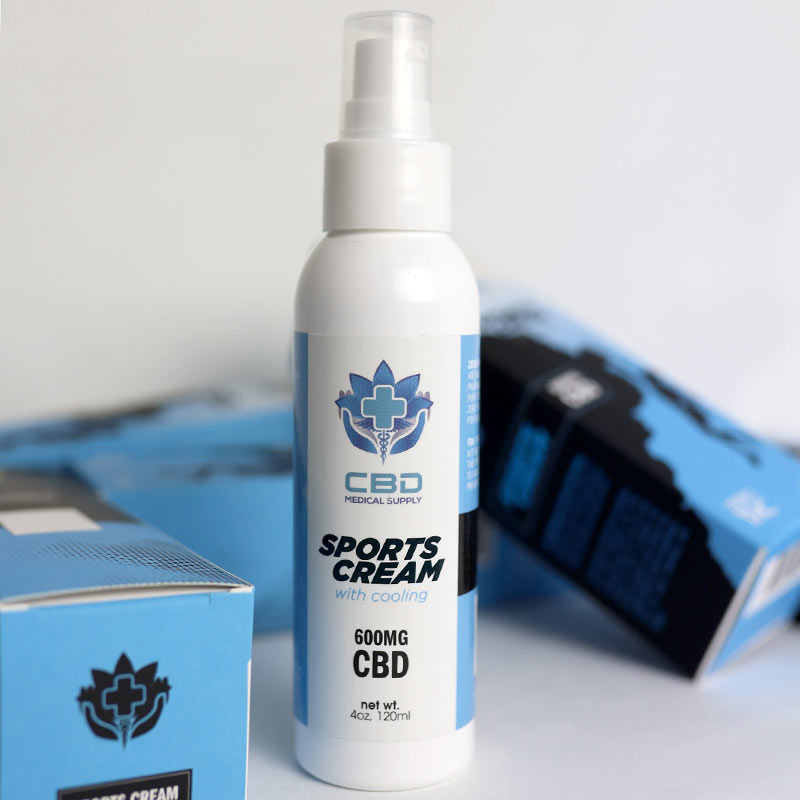 The CBD Sports Cream with Cooling combines the therapeutic effects of CBD with other anti-inflammatory herbs for soft tissue and joint relief.